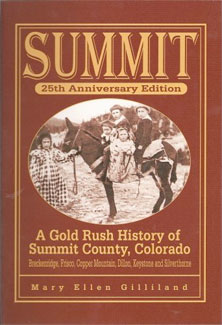 “Welsh-born John Thomas and his tiny wife, Jane, probably used milk, cream and butter from their dairy ranch south of town to feed hungry travelers who stopped at their Thomas Hotel. They had purchased Frisco’s first hotel, built in 1879 by Peter Leyner. Called Halfway House, it served passengers halfway along the arduous stagecoach route between Georgetown and Leadville. The couple quickly became respected town citizens after their 1887 arrival. Bill, born in 1882, and his brother Walter grew up surrounded by silver mining. Bill’s first job at age 11 was driving pack trains of burros laden with silver ore from area mines. Walter grew up to become a mine superintendent. When Frisco’s mining era ended, the men found themselves in need. In 1930 they hatched the idea of giving away lots on their ranch to attract residents who would buy their milk and cream. This crazy idea eventually worked. Though Walter died soon after, Bill remained on the ranch happily surrounded by his new neighbors until his death in 1952….”

“Bill offered his neighbors more than free land and milk. His eccentricity made friends laugh. Once he bought a new suit to wear to the Frisco dance and became so inebriated that he crawled home, destroying his dear-bought new pants. Another time Bill took a lantern to a party, a prudent move since Frisco had no streetlights. He enjoyed the festivities till after dawn, lit his lantern and walked home in the morning sunshine, unaware that it was no longer dark. Both Bill and the lantern were pretty lit.”

Check out: SUMMIT, A Gold Rush History of Summit County Colorado by Mary Ellen Gilliland. Available at local bookstores or by calling the publisher at 970-468-6273 and at http://www.alpenrosepress.com.