The final phase of the Peak One Neighborhood sold out in less then a week!  The excitement for Phase 5 was not a surprise.  The unique land plan, incredible views and the range of floor plans from the cozy yet efficient “Glencliff” to the spacious hillside “Gunnison,” made Peak One Neighborhood appealing to everyone. Many […]

It is hard to believe that the final phase of Peak One Neighborhood is upon us. What an amazing experience it has been! From the ground breaking in 2011, to watching the kids play on fresh sod in Meridian Park, creating connections to trails, Main St. & the bike path and finally, the evolution of […] 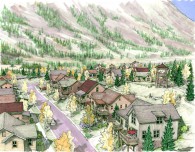 Thanks to all of you who have been patiently waiting on the release of Phase 5- the last and final phase at Peak One Neighborhood. I will be sending out some reminders & updates soon in regards to Phase 5 at Peak One and how to get prepared. In the meantime, here is a brief […]

Peak One Neighborhood Phase 4 Ground Breaking Party is scheduled for Tuesday, April 23rd from 3-6pm. Stop by to get information on the latest inventory, pricing and take a tour of a few different homes. Our new Valdora model will also be available in Phase 4! Munchies and refreshments will be served. Get your Pre-Approval […]

Our new Market home model – The Braddock, built into the hillside of Belford St, offers stunning mountain views with south facing exposure and a fabulous floorplan. No income limits, and no appreciation limits on these select homes. The only requirement is that you work in Summit County. 3 bedroom plus a study, 2.5 bath […]

If you’re like me, when spring shows up I feel as if I have buried myself in things over the winter. But this year is going to be different! I have a plan to start early to make sure I can get out and enjoy Spring, instead of dreading Spring cleaning. Some advice from good […]